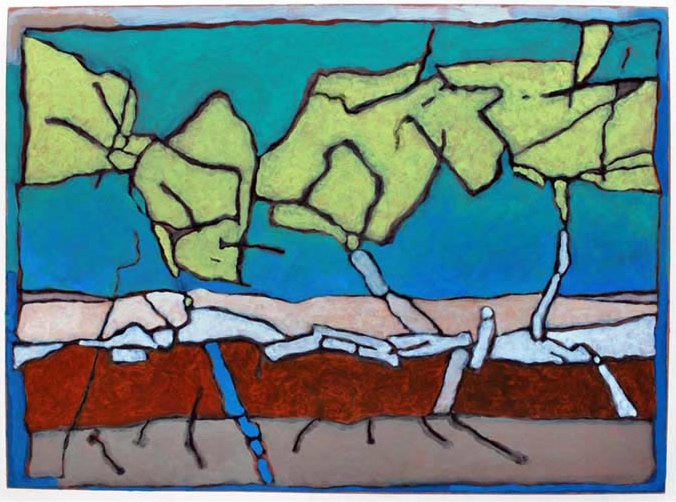 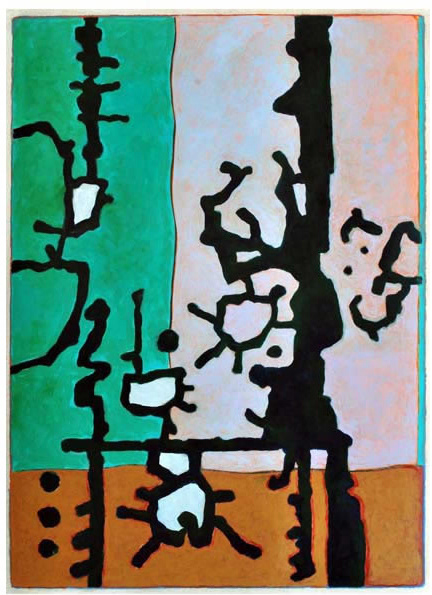 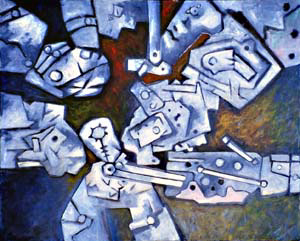 07.30.2010
Born in Chicago, Robert Anderson is a graduate of the Art Institute of Chicago. Early in his career, he worked as an illustrator at the Chicago Natural History Museum. He has been living in Rockport since 1969 in a home that he built with his own hands and has become a skilled carpenter and cabinetmaker in the process. His paintings are full of bright tones, grain, and life, creating wonderful works of art that feel organic and natural as if the viewer is seeing behind the scenes of Nature’s processes.

Here are eight questions with Robert Anderson:
Who or what influenced you to become a painter?
When I was in high school, there was a teacher there who did watercolors. He got me into doing watercolors. I went around Evanston (Illinois) doing what watercolors were then. I was really blown away when I got involved in the Art Institute of Chicago, a magnificent school with so many wonderful 20th century painters, especially the expressionists – this was in the late 50’s. I was introduced to so many great people, European painters mostly, for example, Albers, Max Beckmann, and Ernst – there were a million of them.
I couldn’t get this whole thing out of my head, this whole idea of experimentation. First of all, many people are heavily influenced by so many others that have come before – I certainly was. The next step is trying to develop my own ideas, which is a very time consuming thing, which I have decided has taken me the better part of 50 years to even begin to get there. I feel that I’m just at a point where I can begin to know what I want to do. And the truth is that I could make that statement any time along the line. The whole reason for painting is that there is that next discovery. From that point a view, I guess I could be considered eclectic in that I had gone through so many phases of work.
What creatively inspires and motivates you in your work?
In this last series of work that I have done for two or three years, it has been totally involved with reform line and working with very simple forms starting out. I also found I could get colors that were not achievable for me by using a very thin oil paint wash and then going over that with another color. Then I could get these colors that you cannot get out of a tube. Now I feel like I am going to wind down on this current series and start back up into figure painting. I will go back and forth but when I get to the point that I start copying myself, I’ll say I have to move on.
What are some of the influences for your current work?
It’s this thing that stays with me that I have to do. I have to do something, everyone has to. This is what I learned to do and what I was trained to do. What motivates me is finding new ways of seeing things. If I get to a point that I really like something, I will hang on to it; if I don’t like it, I chuck it.
What is your greatest fear?
In the past, it was not being a halfway decent painter, not keeping up with my standards. Also my greatest fear is doing what I have to do to get out there and start that next painting, and you are looking at something that is empty. There’s got to be something that comes alive and new, at least I hope it is. Then in the process, there is the fear of not making my thoughts come together -almost like a dream where you wake up and say “gee, that was a wonderful dream.” Now can I reproduce it.
Where do you think painting is going?
I have no idea. I am kind of tired of a lot of phases of painting. In some cases, video and film has been quite interesting. I don’t really see a direction, a movement or school. I am sure there is one, because we are a product of what we see and know, so you can’t get way from that.
I would like to think that I really do not want to know where painting is going. If it’s moving, that’s what counts.
What music are you listening to?
Right now, we are listing to a piece by Elizabeth Hunt, but I have been listening to some of the old standbys, Blues, Jazz, Mozart, Handel, and Bach. Those types of things and also opera, I like opera.
What are you reading?
I like history and biographies; the last thing I read was about the Merchant Marines.
What roll does Rockport play in your work?
The rocks interest me, but Rockport, I love it. It is beautiful, but it is not something that influences me. I think that definitely some of the forms I have been doing are suggestive of the wonderful structures that the cracked and broken granite has. But, I was not really thinking of it. I am sure it’s there. You can’t get it out of you, and sometimes the colors are there too.
↑Back to Top