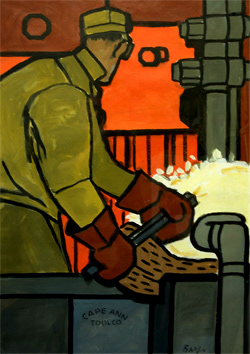 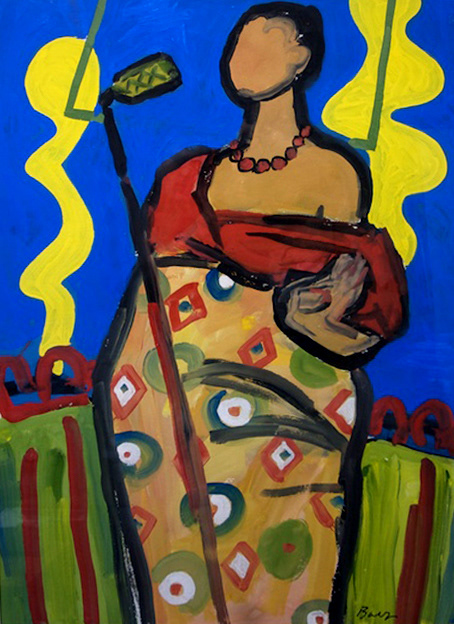 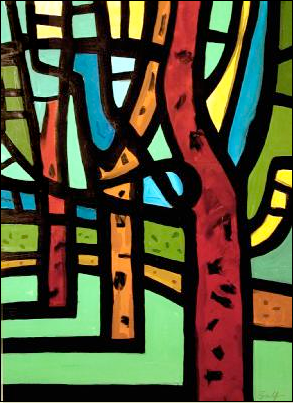 11.10.2010
His work is full of bright colors, motion, and life that flow on his canvas like the jazz he listened to. Oliver Balf was part of the founding faculty at Montserrrat College of Art in Beverly, MA, a school started by a group of Rockport artists who originally taught at New England School of Art. His approach to teaching was that, “everybody has something to say and that for them to discover how to say it is probably the most different thing about my teaching, just getting people to find their own way of expressing themselves.”
An award-winning artist, his work is currently represented by the Mercury Gallery in Rockport and shown at the Rockport Art Association, North Shore Art Association, and other galleries in New England. He also contributed work to toy creators Parkers Brothers, creating illustrations of their prospective board games.

Here are eight questions with Oliver Balf:
Who or what influenced you in becoming a painter?
I grew up in Rye, New York, and went to Rye High School. My art teacher, Mabel Birkhead, married to the director of education for the Museum of Modern Art in New York, thought I had a lot of artistic ability. When I was 17, I went into the Navy — this would have been the early part of 1945 — and she realized that when I came out of the Navy, I would have to go someplace, so she had me register at Temple University, Tyler School of Fine Art, before I went in the service and they accepted me. I got out of the service and didn’t know what I was going to do. I had this school ready to take me on.
What creatively inspires and motivates you in your work?
I guess the biggest inspiration for me was, ah, Matisse. And part of the reason — I grew up in a working class family —and my idol was Norman Rockwell growing up. And then when I went to Tyler, the first year I was there, they had a huge Matisse exhibit at the Philadelphia Museum of Fine Arts. I went to see it, and my first impression was that it was terrible, this guy couldn’t draw or what not, but there was something about the images that stayed in my mind, so I went back maybe 15 or 20 times to that show, and by the time I’d finished looking at it, I began to look at Renaissance art, ah, early Christian art, Egyptian art, and he opened up the whole world of different ways of seeing, so that’s the biggest influence.
What are some of the influences for your current work?
Well, currently, I have a lot of trouble getting around — and I used to love to paint outdoors — but I can’t anymore, so I started doing lots of still lives. It’s available, and I’ve tried to make them as creative as possible by not setting up a still life, just adding things to the paper that I’m working on.
What is your greatest fear?
I don’t know that I have a greatest fear… um, no.
Where do you feel painting is going?
It’s going all over the place. Anything is possible these days, and I think that’s rather exciting because every artist is allowed to be an individual now and can do what express themselves in the way they most want to do, and I think that’s great.
What type of music are you listening to?
I’m an old time jazz fan, Louis Armstrong, of course, and I still listen to 20’s, and 30’s and 40’s music, and I also played when I was in high school. I played in the band — trumpet.
What are you reading right now?
Well, just right now I was reading Adam Gopnik’s book, Through the Children’s Gate: A Home in New York, and enjoying it. I like biographies for the most part too.
What role does Rockport play in your work?
When I was going to college, my roommate came up to study with a local artist, and he came up to Rockport. He rented a tent on South Street behind Poole’s Farm for $200 for the summer. And he invited me to come up and share the tent with him, which I did, and I ended up working in a restaurant in Rockport and painting during the day and loving it. We ended up coming up for four years while we were both in college, in the summers, doing various things and painting, and at that time, I got accepted into the Rockport Art Association. I was probably 19 or 20.
Then I left. And I worked in New York for a while and then I got married. We lived in Chicago for a while, then came back to New York, and after our first child was born, and we needed a bigger place and couldn’t find one we could afford, I said why don’t we go up to Rockport. I know that we can afford rents up there. That’s what got us up here. I don’t know that we thought we would stay forever, but we ended up having two more children and ended up making a life for ourselves here.
The early landscapes that I did in Rockport were very open and free and spontaneous, and I loved being out here with the clear days, the light changing, and the excitement of the visual stuff itself — the water, the rocks, all of that, the shacks, yeah, I thought that was great.
↑Back to Top